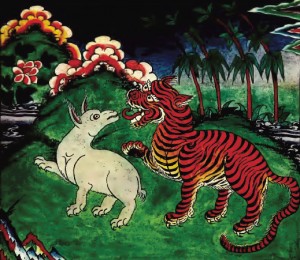 A hare was going along a road one day, when suddenly,on turning a corner, he came upon a large Tiger. The Tiger at once seized the Hare, and said that he was going to eat him.

“Please, please, Uncle Tiger,” said the Hare, holding up his thumbs in supplication, ” please don’t eat me, I am only a very small beast, and will make a very insufficient meal for a great big animal like you. And if you will spare my life I will take you to where you can find a much bigger, fatter creature than me for your supper.”

” Very well,” said the Tiger, ” I agree to that. But if you don’t show me a much bigger animal than you are, I shall certainly be obliged to eat you.”

So he released the Hare, and the two walked off along the road together.

As they went along night began to fall, and when it was quite dark the Hare began smacking his chops and making sounds as if he was eating something very nice.

” What are you eating, Brother Hare ? ” asked the Tiger.

” I am eating my eye, Uncle Tiger,” replied the Hare.” I have taken it out and eaten it ; it is very nice, and it soon grows again.”

The Tiger was rather surprised at hearing this, but being very hungry he proceeded to scrape out his own eye and eat it up. After going a little further the Hare again began smacking his lips, as if he was eating something.

” What are you eating now, Brother Hare ? ” asked the Tiger.

” I am eating my other eye, Uncle Tiger,” replied the Hare ; ” it is even better than the first.”

The foolish Tiger on hearing this proceeded to scrape out his other eye and eat that.

The Tiger was now quite blind, and the Hare led him along to the brink of a deep gulf, where he advised the Tiger to sit down and rest for a while. And after the Tiger was seated, the Hare said:

“Don’t you find it cold, Uncle Tiger? shall I light you a fire ?

” Yes, please, Brother Hare,” said the Tiger, ” I think a fire would be very pleasant.”

So the Hare lighted a fire just in front of the Tiger, and when it was blazing up he kept putting the sticks nearer and nearer the Tiger, so that the Tiger was obliged to keep edging further and further away, when all Of a sudden he toppled over backwards into the gulf behind. Now it happened that half-way down the gulf a tree Was growing from a cleft in the precipice, and as he passed this the Tiger seized one of the boughs with his teeth, and so arrested his fall. The Hare, peeping over the edge, saw what had happened, and he called out:

The Tiger was afraid to open his mouth to reply, and all he could do was to growl, ” M–m–m”

The Tiger, anxious to please the Hare, Opened his mouth to say ” Ah ! ” and was instantly precipitated to the bottom of the gulf, where he fell upon some rocks and was killed.

Next morning the Hare Went hopping down the road when he met a Man driving along a lot of Horses.

” Good morning, Father Man,” said he to the driver.

” Would you like to know where you can find a good tiger’s skin ?”

” Yes, please, Brother Hare,” said the Man, thinking he would sell the skin and make a lot of money.

So the Hare pointed out to him where the dead Tiger lay in the ravine, and the Man hastened off to skin it, after first asking the Hare to take care of his Horses while he was away.

As soon as he was out of sight the Hare saw two Ravens sitting in a tree overhead. He called out to them :” Brothers Raven, look here ! Here are a lot of Horses with no one in charge. Why don’t you come down and feed on the sores on their backs ?”

The Ravens thought this was a good idea, and flying down, they perched on the Horses’ backs, and began to dig their beaks into the sore places. The poor Horses,in fear and pain, soon stampeded, and galloped about all over the country.

The Hare then hopped on a little further down the road and came upon a Boy tending Sheep.

“Good-morning, Brother Boy,” said the Hare, “would you like to know where there is a fine Raven’s nest, full of eggs ? ”

” Yes, please, Brother Hare,” said the Boy, thinking he would climb the tree and take the Raven’s eggs. So the Hare pointed out to him the tree where the Raven’s nest was, and the Boy ran off to get the eggs, after first asking the Hare to take charge of the Sheep for him while he was away.

The Hare soon espied a Wolf on the hill-side not far off, so he went up to him and said :

” Good-morning, Brother Wolf, do you know that there is a fine flock of Sheep quite unguarded down there, and I should advise you to take advantage of this opportunity of killing some of them.”

The Wolf at once rushed down the hill into the middle of the flock of Sheep, scattering them all in every direction, and killing as many as he thought he required for his own use.

Meanwhile the Hare proceeded to the top of a high hill whence he could survey the whole country. From there he was able to discern the dead Tiger lying in the ravine, with the Man stripping off its skin ; the Horses careering all over the country, with the Ravens pecking at the sores on their backs ; the Boy robbing the Raven’s nest ; and the Sheep, pursued by the Wolf, scattered to the four quarters of the compass.

The sight so amused the Hare that he leaned back on a handy stone, and laughed to such an extent that he actually split his upper lip. And it has remained split to this very day.