Once upon a time there was a family of Jackals, consisting of a Father, Mother, and five young ones. After living for some time very comfortably near a large village, they found that the dogs of the village were becoming so numerous and so troublesome that they considered it necessary to change their place of abode.

So one fine evening they started off and travelled away across the country, keeping a sharp look-out for some desirable spot in which they might settle down. After a while they came to the edge of a forest, and having travelled for some little distance into the thickest part of the wood, they arrived all of a sudden at a Tiger’s den. The young Jackals were a good deal frightened at the smell of the Tiger’s den, but Father Jackal reassured them, and said that he thoroughly understood Tigers, and knew how to deal with them. So he went forward alone, and, peeping in, he found that the Tiger was out, but that he had left a large quantity of deer’s flesh lying in one corner, which apparently he had not had time to consume. So he called Mrs. Jackal and the children, and told them to go inside and to have a good feed, and to make themselves quite comfortable. After making a good meal himself off the deer’s flesh, he said to Mrs. Jackal:

” You and the children can now go to sleep ; I shall go on to the roof of the den and keep a look-out for the Tigec When I see him coming I shall rap on the roof, and you must at once wake up the children and make them begin to cry, and when I ask you what they are crying about, you must say that they are getting impatient for their supper.”

Accordingly Mr. Jackal went up on the roof, while his family settled down to sleep in the snuggest corner of the Tiger’s den. Shortly after Father Jackal heard a slight crackling amongst the dry leaves of the forest ; and in the dim morning light he discerned the form of a great Tiger approaching his den through the tree-stems. According to the arrangement he had made, he rapped with a loose stone upon the roof of the den, and Mrs. Jackal immediately woke up the young Jackals and made them cry.

” What are those children crying about ? ” called out Father Jackal.

” They are very hungry, and getting impatient for their supper,” was the reply.

” Tell them they won’t have long to wait now,” said Father Jackal ; ” the Tiger will probably be home very soon, and we shall all be eating hot Tiger’s meat before long.”

On hearing this the Tiger was very much alarmed, and thought to himself:

” What kind of strange animal can this be which has entered my den, and is waiting to cook and eat me on my return ; it must certainly be a very fierce and terrible creature.”

So without waiting to investigate the matter any further, he turned tail and ran off as fast as he could through the forest. After running some way, he came across an old Baboon, with a great fringe of white hair all round his face.

” Where are you running to, Uncle Tiger ? ” asked the Baboon.

” Well,” said the Tiger, ” the fact is, that a family of strange animals, who call themselves Jackals, are at this moment in occupation of my den. As I was approaching my den, after a long night’s hunting, one of the creatures was actually sitting on the roof, looking out for me, and as I got close up I heard him tell his young ones that they were to have hot Tiger’s meat for supper. Fortunately for me, he hadn’t seen me, so I thought the best thing I could do was to make off as fast as I could, in order to avoid being eaten.”

On hearing this the Baboon was very much amused, and set to work to laugh very heartily.

” Why,” said he, ” what a foolish Tiger you are ! Have you never heard of a Jackal before ? Don’t you know that it is you should eat the Jackals, and not the Jackals you ? You come along with me, and I will soon show you how to deal with people like that.”

The Tiger was somewhat reassured on hearing what the Baboon had to say, but, even so, he was at first very reluctant to return again and to incur the danger of being eaten ; but the Monkey encouraged him, and finally they set off together, the Monkey twisting his tail round the Tiger’s, in order to give him a feeling of support and confidence. 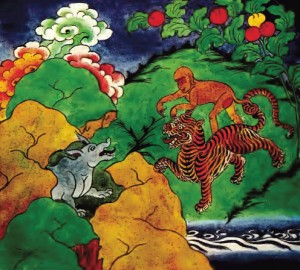 As they came nearer to the den, the Tiger grew more and more timorous, and would only advance very slowly, ready to take flight at any moment. However, they went on together, tail-in-tail, until presently Father Jackal on the roof of the den caught sight of the pair, and called out:

” That is right, Brother Monkey, bring him along quickly; we are all half starved. But what do you mean by only bringing one of them ? I had expected you would bring us at least two or three.”

On hearing this, the Tiger at once suspected that the Baboon was in the Jackal’s employ, and that he was being led into a trap. Without a moment’s hesitation he turned about and fled precipitately into the depths of the forest. The unfortunate Baboon, whose tail was tightly twisted round the Tiger’s, was unable to free himself, and was dragged and bumped hither and thither in the Tiger’s rush through the thickest and thorniest parts of the jungle. When at length the Tiger paused, many miles away, to take breath, he looked back at his flanks, and all he saw of the Monkey was a bit of its tail which had broken off and was still twisted round his own. He never again returned to his den, which was occupied henceforth by the Jackals, who lived there for many years in peace and comfort.