After a spiritual and temporal reign of over half a century, Tupden Gyatso, the XIII Dalai Lama of Tibet, died in the year 1933. The XIII Dalai Lama had stressed the importance of reforming the social, political, and economic structures of Tibet, prophesying just before he died that Tibet was in danger of being overrun, its people slaughtered, and its sacred beliefs being smashed under the might of an enemy. It made all the more frightening by the recognition of a rising shadow to the east (China). As is tradition, they searched all over Tibet for the reincarnation of the XIII Dalai Lama. They found him in the province of Amdo, in the village of Takster. In that village was a monastery with a roof of jade and gold, as had been prophesied. In a house that had turquoise tiles (this had also been prophesied) they found a boy named Lhamo Dondrub. The search party’s leader disguised himself as a servent and the junior official Lobsong Tsewang pretended to be the leader of the group. Kewtsang Rinpoche spoke to the child and was suprised to hear him demand to see the rosary that Kewstang was wearing that had once belonged to the XIII Dalai Lama. Kewstang promised to give the rosary to the boy if he could guess who he was and give the correct name of the party’s leader. The boy replied that Kewstang was “Sara aga”, a colloquial way of saying a “Lama of Sera”. He then identified Kewstang by name, gave the name of Lobsong Tsewang, and declared that Kewstang was the leader of the party. After more questioning and tests, the state oracles were consulted. The confirmed the news that Lhamo Dondrub was indeed the reincarnation of the XIII Dalai Lama. Finally, on February 22, 1940, the newly named Tenzin Gyatso was enthroned officially as the XIV Dalai Lama. 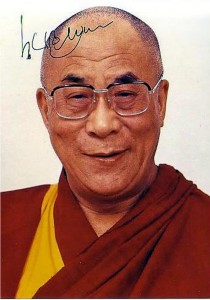 The Dalai Lama spent the next years of his life in a deep study of Buddhism. Government remained in the hands of regents until the assumption of full authority by the Dalai Lama im November 1950. He was only sixteen at the time. The reason for such a dramatic step was the rise of The Peoples Republic of China, which made clear its intentions of seizing Tibet. Such a step came only just in time, the Chinese People’s Liberation Army rolled across the frontier in October 1950 and gained foothold in the country. Less than a year later, troops entered Lhasa. Within months, there were over 20,000 Chinese troops in Lhasa alone. The young Dalai Lama, accepting the reality of the situation, entered negotiations with the Chinese. Negotiations were useless, and some believed that the Chinese might even go as far as kidnapping the Dalai Lama. The Dalai Lama was forced to flee the country. Dressed as a soldier and wearing a fur cap, he traveled with his closest companions. Now faced with the enormous task of creating a government in exile, he received help from India, who let him set up his government in exile in Dharmasala, India. He has never returned to Tibet. The flight of the Dalai Lama signaled the escape of tens of thousands of Tibetans into India and Nepal. Most who survived the trip-many died in the mountains or were shot on sight by Chinese troops for trying to leave the country-found themselves in refugee camps, where the principle means of surviving was to dig roads and build other camps for the constant flow of refugees. Working with the Indian government, the Dalai Lama tried to improve the conditions and to prepare his people for a long and painful exile. Dharmasala became the center of the Tibetan government in exile.

The Dalai Lama helped to rebuild Tibetan society and and Tibetan monasticism, which had been a pillar of life in Tibet. Today there are over 200 reconstructed monasteries. The Dalai Lama still had two main objectives in mind. First, there was the ongoing process of democratization for the Tibetan people. Second was the effort to gain international support for the Tibetan cause. All the while continuing negotiations with China, which proved useless. Acknowledging the futility of further petitions, the Assembly of Tibetan Deputies passed a resolution on January 23, 1992, stating that no new initiatives would be made until China itself adopted a new attitude. The travels of the Dalai Lama have also made him one of the best known and most respected spiritual figures of this modern era. As people all over the world became to know the lama, they realized the richness of his message beyond the appeal for tibet, such as his teachings on peace, compassion, inner peace, and the environent. To this date he has travelled to hundreds of countries, speaking on social issues and enduring themes such as peace, brotherhood, and love.