Once upon a time there was a King who ruled over a large tract of country in which there lived a great number of Mice. Generally the Mice were very prosperous and had plenty to eat, but it happened one year that the crops of the country were very poor, and the Mice, who subsisted chiefly on the spare grains left after the harvest, found that their stores were running short before the end of the winter. So the King of the Mice decided that he would make a petition to the King of the country, to lend the Mice what grain they required on condition that they repaid the whole amount the following year. So he dressed himself up in his best clothes and set off one morning to the King’s palace. When he got to the door of the palace the door-keeper asked him where he was going.

When the King heard that a Mouse wanted to see him he was very much amused, and he ordered that the little animal should be admitted. When the Mouse entered the King’s presence he walked slowly up the Hall of Audience, carrying in his hand a little silk thread, which he presented to the King, instead of the usual ceremonial scarf.

“Oh! King,” replied the Mouse, “you must know that this year our crops have fallen short, and we are threatened with a famine unless we can borrow sufficient grain to carry us through the winter ; so I, who am King of the Mice, have come here to ask you if you can help us in this matter. If you can lend us the grain we require, we will repay you faithfully with interest at the next harvest.”

” I think that we shall require,” said the Mouse, ” one of your big barns full.”

“But,” said the King, “if I were to give you a barn full of grain how would you carry it away ? ”

” Leave it to me,” said the Mouse ; ” if you will give us the grain we will undertake to carry it off.”

So the King agreed to present the Mice with one of his great granaries full of barley, and he ordered his officers to throw open the doors, and to let the Mice carry away as much as they wanted. That night the King of the Mice summoned all his subjects together, and to the number of many hundreds of thousands they invaded the barn, and each one picked up as much grain as he could carry in his mouth, on his back, and curled up in his tail, and when they had all finished the barn was empty, and not a single grain of barley was left.

Next morning, when the King went out to look at his barn, he was very much astonished to find that the Mice had been able to empty it so effectually, and he conceived a very high opinion of their powers ; and when, in the following spring, the King of the Mice redeemed his promise by repaying with interest the loan he had taken from the King of the country, the latter saw that they were trustworthy as well as clever. Now it happened shortly after this that the King of the country went to war with a neighbouring kingdom, which lay on the opposite side of the river forming the frontier between the two countries. This other country was far more wealthy and powerful than the country where the Mice lived, and its King soon assembled a huge army on the opposite bank of the river and began making preparations for invasion.

When the Mice heard what was happening, they were much distressed, for they feared that if the enemy entered their country and destroyed their friend the King, they themselves would suffer considerable hardships under a strange ruler; so the King of the Mice set out again to visit the King of the country, and when he reached the palace he demanded an interview with His Majesty. This was at once accorded to him, and finding the King looking very depressed, he addressed him as follows :

” I have come to you a second time, Oh King, in order to see whether I can be of any use to you. The last time I was here you did me and my people a great favour, for which we shall ever be grateful, and if it is now in our power to assist you in any way, we shall be very glad to do our best.”

The King, in spite of his grief, was much amused on hearing these words from the Mouse.

” Why,” said he, ” what could the Mice do to help me in my present predicament ? We are threatened with invasion by a foreign army, outnumbering mine by many thousands, and all the men I can muster will not be sufficient to enable me to repel the enemy. I don’t see how the Mice can help me.”

” Do yo’u remember, Oh King ! ” replied the Mouse, ” that on the last occasion I was here you doubted our ability to carry away the grain you had given us, or to repay you the loan ? And yet we proved ourselves able to do both. All we ask you now is to trust us again, and if you will undertake to do one or two things which we ask of you, we on our part will undertake to rid you of the invading army.”

The King was a good deal struck by this remark of the Mouse, and he replied :

” Very well, what you say is quite true ; and if you will inform me what you wish me to do, I will undertake to carry out my share of the bargain.” 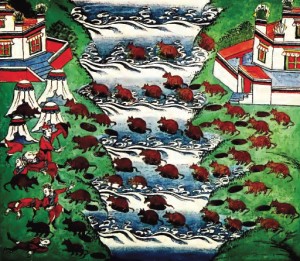 ” Well, then,” answered the Mouse, ” all we wish you to do is to provide us by to-morrow evening with one hundred thousand sticks, each about a foot long, and to have them laid in rows on the hank of the river. If you will undertake to do this, we on our side will undertake to stave off the threatened invasion and to put the opposing army into a state of confusion and panic. And if we succeed in carrying out all we promise, we will ask you for the future to safeguard us against the two principal dangers which threaten the existence of the Mice who live in your country.”

” I will gladly do what I can,” replied the King, ” to safeguard you against these dangers if you will tell me how to proceed.”

“The two dangers to which I refer,” continued the Mouse, “are flood and Cats. You see the majority of our burrows are in the low-lying land near the river, and whenever the river rises a little it overflows this level country and floods our nests. What we would suggest to you is that you should build a strong dam all down the river bank so as to ensure that the water cannot overflow into our nests. And as to the Cats they are always the persecutors of Mice, and we ask you to banish them altogether from your kingdom.”

” Very well,” replied the King, ” if you can succeed in averting the danger which now threatens us, I will undertake to do all that you ask of me in this respect.”

On hearing this, the King of the Mice salaamed profoundly to the King, and returned as fast as he could to his own subjects. On the following evening he marshalled all the fullgrown Mice of his kingdom, and about dusk, he led down a large army numbering several hundreds of thousands to the edge of the river, where he found the sticks all laid out as had been arranged with the King. In accordance with instructions they had received, the Mice at once proceeded to launch these sticks on the river, and they themselves embarked upon them two or three at a time ; and so, pushing off from the bank, they sailed across the river and soon landed on the opposite side.

It was now quite dark, and the enemy’s soldiers were all asleep in their camp, some lying in tents and some in the open air, with their arms beside them ready for any alarm. The Mice on a word of command from their King, scattered themselves without delay through the sleeping camp, and each one began to do as much destruction as he possibly could in the shortest possible space of time. Some nibbled at the bowstrings and the slings of the soldiers’ muskets ; others gnawed the slow-match and fuses ; whilst others bit off the clothes and pigtails of the sleeping men. In fact, they attacked fiercely anything upon which their teeth could make an impression, and tents, stores, grain, and provisions of all kinds were soon reduced to shreds or scattered in confusion in every direction ; and after a couple of hours’ work they all collected upon the river bank, and, embarking again on their sticks, they sailed quietly over to their own shore without having been detected by the enemy, or even having caused any alarm.

Next morning at daybreak, a great outcry arose from the enemy’s camp. Each man as he rose from his sleep found himself in a woeful plight—his clothes in rags, his pigtail cut off, his bow without a string, his rifle without a sling, and with no fuse or slow-match to fire it, and no provisions for breakfast. Each one began to accuse the other of theft and treachery, and before many minutes had passed the whole camp was in a state of wild confusion, comrade quarrelling with comrade, or accusing their officers of dishonesty and ill-faith.

In the midst of this uproar the sound of bugles was heard on the opposite bank, and a few shots were fired; and terrified at the thought of being taken unawares, the whole army took to flight, and in a few minutes not a man was to be seen. When the King of the country of the Mice saw what had happened he was greatly elated, and, sending for the King of the Mice, he thanked him very sincerely for his good offices. And, in accordance with the bargain they had made, he at once had a strong embankment constructed all down his own side of the river to guard against floods, and he issued an edict forbidding all persons, on pain of death, to keep a cat of any kind henceforth within the frontiers of his country, and so the Mice lived securely and happily ever afterwards.

And in order to insure against any more attempts at invasion from the side of the neighbouring kingdom, the King sent a herald across the river to the ruler of that country, to say that, on this occasion, he had only considered it worth while to employ his Mice to defeat his enemies; but that if he was again threatened, he was ready to employ first all the domestic animals of the country; and if they did not succeed, he would have to have recourse to the wild beasts ; and in the event of their failing, he was prepared to come himself with his warriors in order to produce the desired results.

When the ruler of the other country heard this message he considered it wiser at once to make a treaty of peace, as he could not hope to defeat the warriors and wild beasts of a country whose Mice had shown such skill and courage. So the two countries remained on friendly terms for many years after; and the Mice, secured against flood and Cats, lived happily and safely, and received every year from the King of the country a barnful of grain as a free gift in thankful recognition of the services which they had rendered in time of need.